My 40th birthday present was a Golden Retriever, we named Poppy. Sadly she passed away on Friday aged 13 3/4. I may write more on life with a camera and a dog, but for now my star has shot-up into the sky. 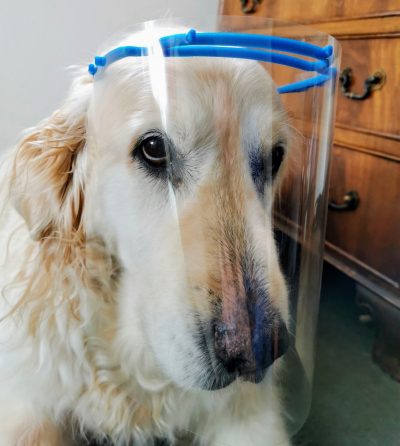 With some Engineering skills and a 3D printer, I joined the National 3D Printing Society to create face visors for people in healthcare areas as Personal Protective Equipment (PPE). This is because there are severe shortages of PPE. Accountability for this must be served at a later date for those in charge, but for now lets get printing.

I have printed 221 after 3 weeks although a lot of optimising of print settings took place in the first 10 days then moving to 24×7 printing. This whole effort is a non-profit exercise from supply to delivery with the largest cost, filament used to create them. To help sustain this activity a JustGiving charitable drive is underway to finance supply of filament used in their manufacture and keep supply going.

Felt like a student tonight. Something agitates your balance and forces you into fight or Netflix or Channel 4 as it was back then. So it is now. I can’t sit back, ignore or change channel. ‘Something must be done’ has bitten so I’m off to London town to register my displeasure.

Brexit is an old Conservative malignancy that was never treated. It festered and turned. John Major tried, Ken Clarke tried, David Cameron thought he could avoid it through a referendum and lost. Against all odds it was lost by a margin of 2.4% of the voting population. Coupled with a Vote Leave campaign that has since been fined and investigated by the Police over illegal practices during the referendum.

Social problems that contributed to people voting Leave require UK government action, not a detachment from the market that fuels our economy.